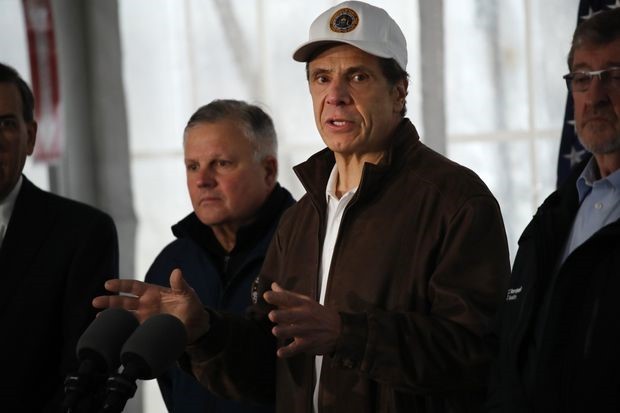 I live in Phoenix now, but I am a New Yorker. Born, raised, educated and lived in NY most of my life. I will forever identify with and consider myself a New Yorker. Especially in times of crisis. Like 9/11 and like now. Along with many of us – I have been religiously watching Governor Cuomo as my ‘one source of truth’ for the last couple of months (wait, it’s only been days – it just feels like months). Here is what I learned about WHY he is showing up. THIS IS LEADERSHIP:

1.      Beyond anything else, every time I see the man on TV, he appears calm and confident. Whether he is giving a press conference or talking to his brother on CNN, he is measured. He appears confident even in the absence of knowing exactly what comes next.  He is even dressing down – giving us the appearance that he too is ‘working from home’ even though he isn’t. His calmness is contagious. And it’s important. And it helps all of us listen to him just a little bit harder.

2.      He is consistent. He shows up every day and continues to tell us what he said yesterday, and what he is learning today.  He is not changing his story – his vision is clear – it’s on his slides – it’s what is most important: “STAY HOME, STOP THE SPREAD, SAVE LIVES.”

3.      He arms himself with the facts. He starts with facts; he refers to facts and he doesn’t dispute facts. He also doesn’t editorialize the facts. He gives them – and the ones he gives are not easy to hear. Yet, he gives them anyway. When he is talking about his opinion, he says – “this is my opinion.” There is no discussion of fake news, made up facts or distorted truth to benefit himself. This “arming himself with the facts” is much harder than I believe we can understand. The facts change hourly – and he always seems to have a grasp on them. Every time.

4.      He is putting great people around him and letting them talk – but is still clearly the leader. This morning he introduced his new team – people he has worked with for 30 years. People he can trust. People who also know the facts and can answer the questions without gazing at him, looking for approval and fear of retribution in the case that they make a mistake. He has a clear understanding of what each of them is working on and can (and will) comment when and if necessary. He will not undermine any of them. Of this I am 100% confident. His comment about not seeing many of them in a long time and wanting to shake their hand or give them a hug – even though he can’t right now, was endearing and incredibly authentic.

5.      He is authentic. There is no doubt that this is the Governor Cuomo that those around him know and appreciate. We know from Predictive Index and other assessments that in times of stress, we see people as they truly are. Those that study leadership, know that the way a person behaves is governed by their own leadership voice – based on their beliefs, their experiences and their personal core values. Don’t get me wrong – I’m sure that he has a “public face” that we are all seeing now – but my guess is, the team that he’s worked with for 30 years wouldn’t come back and surround him unless his private face was closely aligned with what we see on TV.

6.      He speaks clearly, in plain terms. He doesn’t “dumb things down” and doesn’t speak so that we must follow him around with a dictionary proving he’s the smartest guy in the room. He speaks honestly and eloquently – and we all understand him.

7.      He does a good job of balancing praise with the current realities – using phrases like “I’m proud but also aware…”. He’s not talking about himself; he’s not bragging about what he’s done. He is reflecting every day on the current realities, recognizing what has been done right so far and moving quickly to the next thing. It’s the perfect balance. It’s not over the top. It’s authentic (see point #5) and honestly, it makes him a leader that people will follow.

8.      You know that he is working like crazy behind the scenes…you don’t know this because he tells you. Instead you know this because of how on top of everything he is. With facts and data changing by the day – in fact – in many cases changing by the hour, he has a firm grasp on all that is going on. And yet, when he is in front of the camera – he doesn’t act like this is his superpower. Instead he is calm (see point #1) and knowledgeable and anxious to share what he knows.

9.      He is making quick decisions, based on what he knows at the time the decision needs to be made. He’s not waiting for every piece of data. He’s not looking for perfection. He is acting decisively with the best information that is available. Because he trusts those around him, and the information that they have – his decisions (made however quickly) are carried out without hesitation or question.

10.  Lastly, and maybe most importantly, he is also talking about how he feels…his emotions. He is always careful not to mix that up with facts or make assumptions based on his emotions – but in order for him to empathize (which he does) with his fellow NY’ers, or fellow Governors, or his team, or even those of us watching him outside of NY who are hungry for that kind of compassionate leadership – he has to personalize what this feels like, and in small snippets, talk about it. He talks about his family – his daughter, and that allows us the necessary glimpse into his life which lets us know we’re not in this alone.

None of this is easy. In fact, for an optimist like myself it has been hard not being able to find a silver lining in any of it. However, I do have some time now. Time to sit back and watch. Time to see who is rising to the occasion. Who is reaching out to check on their friends, their neighbors and their colleagues?  Who is living out this time from a frame of abundance vs. one of scarcity? I don’t know what is going to happen, how we will move forward, but I do know one thing for sure. Leaders are needed now more than ever – who will reach down deep, listen to their own leadership voice and push forward to have it be heard…

Are leaders born or made? Who knows? What I do know is real leadership shows up in a crisis. Look around you. Who is showing up? What do you need to do to show up right now for those that need you? It doesn’t have to be big or bold – it just must be aligned with who you are and what you believe. It must be intentional. And, it must be now.